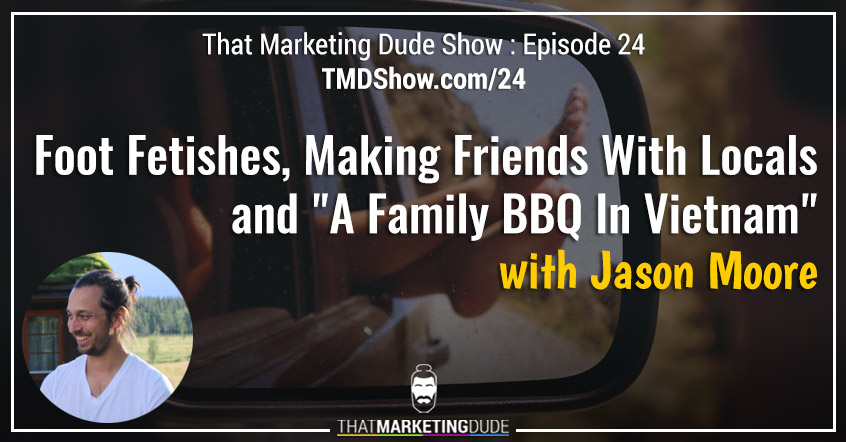 TMD 024 : Foot Fetishes, Making Friends With Locals and “A Family BBQ In Vietnam” with Jason Moore

On today’s show, I have Jason Moore on the show for a fantastic travel stories episode where we end up trading several stories about making friends with locals… And feet.

Jason was gracious enough to come on today’s episode to share some travel stories with us.

I’ve been following Jason’s podcast, Zero to Travel, for a little while and he was one of my inspirations for this podcast! Yes, the idea of incorporating travel stories into every episode and have episodes purely on travel stories was conjured up whilst I was listening to his show.

We end up talking about MANY different things on this episode, but they mainly seemed to focus around why it’s important to make friends with locals no matter where you’re travelling too… And also feet. 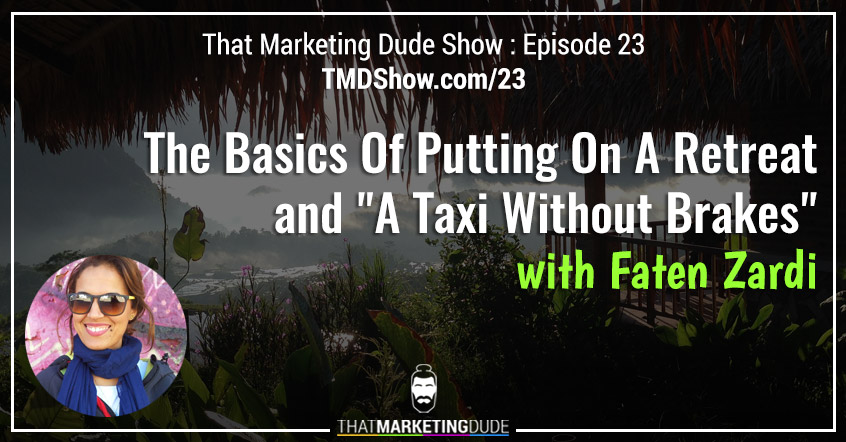 TMD 023 : The Basics Of Putting On A Retreat and “A Taxi Without Brakes” with Faten Zardi

In today’s episode, I have my good friend Faten Zardi on the show to talk about how she sets up her retreats. She’s hosted her first retreat and already planning her second!

Faten has already put on one retreat and is in the process of putting together another. I thought it would be GREAT to bring her on to talk about this because this is something I would love to do myself as well!

I know retreats are a big thing in the digital nomad space so if you’re thinking of putting one on yourself, or even if you’re just attending one, you’ll get a good idea of the things you’ll need to consider. 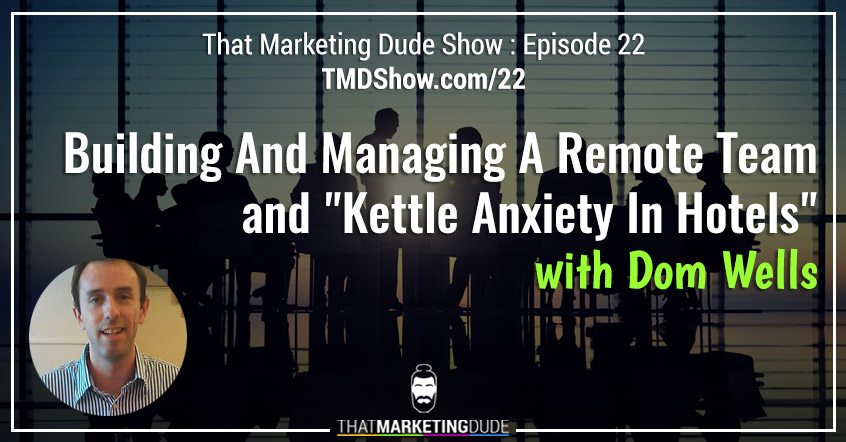 TMD 022 : Building And Managing A Remote Team and “Kettle Anxiety In Hotels” with Dom Wells

In today’s episode, I have my old friend Dom Wells on the show to talk about building remotes teams in your business.

Dom has done a fantastic job building his business to 6 figures over that past few years. I knew Dom from way back in the day when we were both working with affiliate websites and Dom’s goal was to have 5 figure months. It’s been great watching his journey.

What’s gotten Dom to the level of success he has right now is the team he’s built in his business. So in this episode, we dive into how he’s built that team.

TMD 021 : Utilizing Goal Planning To Get Shit Done and “Trying To Make It To A Cruise Ship In Puerto Rico” with Tom and Ariana Sylvester

In today’s episode, I have two good friends of mine on the show to talk about utilizing goal planning to get shit done in your business… We talk about long term and short term goal setting.

Tom and Ariana Sylvester are two people who CRUSH IT when it comes to planning and organisation. This was something I definitely needed help with so after we had a chat about my own goal setting I just HAD to bring them on the show.

We dive into how with proper planning, you can achieve incredible things in your business. You won’t we wasting time trying to find the right things to do and will have a roadmap to reaching your goals.

Not only do we talk about how to apply this in your business but also with a family. Tom and Ariana have children and run 3… Yes, 3… Businesses so they have to have shit in check!

TMD 020 : How To Be Like Marmite In A Non-Native Tongue and “A Night Out In Spain When You Don’t Speak Spanish” with Kay Fabella

In today’s episode, I have Kay Fabella on to talk about finding your voice and building an audience in a language you don’t speak fluently. Kay moved to Spain without speaking the language all too well (which you can tell with her travel story at the end haha) but has built a strong business with the Spanish-speaking world.

Kay Fabella is a storyteller and communications strategist. She helps business owners around the world develop a communication strategy to meaningfully connect with their audiences — and meet their business goals. Kay is also a world-recognized author, speaker, and trainer. A Los Angeles native, she’s built her dream business from Spain to help bring brands to life in English and Spanish. She’s also been featured in international media including The Huffington Post, El País and EFE Emprende.

The woman has some skills!